Because I've always felt a wonder at old photographs not easy to explain. Maybe I don't need to explain; maybe you'll recognize what I mean. I mean the sense of wonder, staring at the strange clothes and vanished backgrounds, at knowing that what you're seeing was once real. That light really did reflect into a lens from these lost faces and objects. That these people were really there once, smiling into a camera. You could have walked into the scene then, touched those people, and spoken to them. You could actually have gone into that strange outmoded old building and seen what now you never can - what was just inside the door.
The wonder is even stronger with old stereoscopic views - the almost, but not quite, identical pair of photographs mounted side by side on stiff cardboard, that, looked at through the viewer, give a miraculous effect of depth. It's never been a mystery to me why the whole country was once crazy about them. Because the good ones, the really clear sharp photographs, are so real: Insert a view, slide it into focus, and the old scene leaps out at you, astonishingly three-dimensional. And then, for me, the awe becomes intense. Because now you really see the arrested moment, so actual it seems that if you watch intently, the life caught here must continue. That the raised horse's hoof so startlingly distinct in the foreground must move down to the solidness of pavement below it again; those carriage wheels revolve, the girl walk closer, the man move on out of the scene. The feeling that the tantalizing reality of the vanished moment might somehow be seized - that if you watch long enough you might detect that first nearly imperceptible movement - is the answer to the question Kate has asked me more than once: "How can you sit there so long--you hardly move! - staring endlessly at the very same picture?" 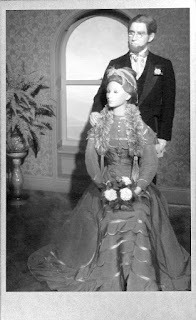 When I am in Cornwall for a holiday, one of my favourite excursions is to the Flambards Theme Park. I don't go for the rides, the main attraction for me is the Victorian Village. It really is like stepping back in time with authentic sounds and even smells. The village is built indoors and kept in semi darkness. It is as if one is walking through a Victorian street and peering into the windows of real shops where the people have been frozen in time. It is even better to go when there are not many visitors, just before the Park closes for example, and really get into the atmosphere of the place.

One particular establishment that interests me is, of course, Mr Maggs photography studio, where the couple on the right can be seen posing for a photograph.

I have been to the Park many times since the late 1970s, and always explore the Village at least twice. Hopefully the photographs below will give you a little flavour of the Victorian photographer's studio and shop, and you will consider visiting the Park when you are down in the West Country. It is cheaper to go off season when the rides are not open to the public. 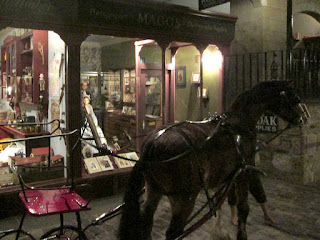 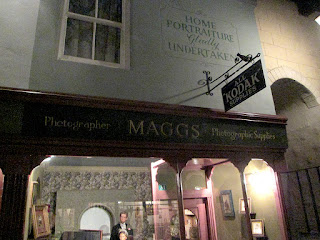 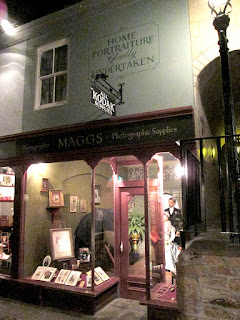 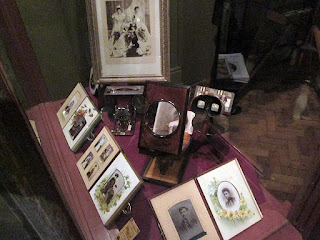 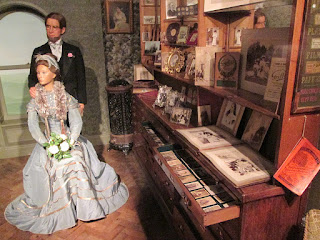 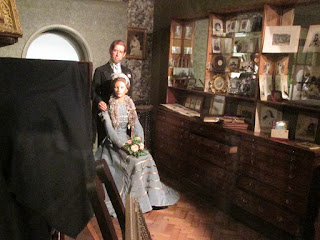 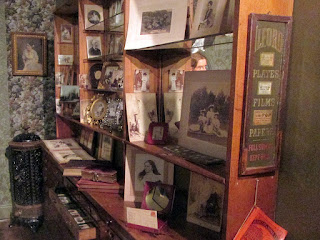 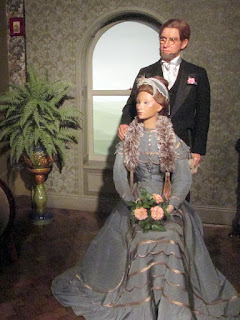 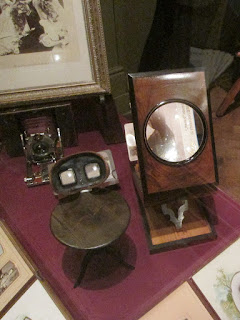 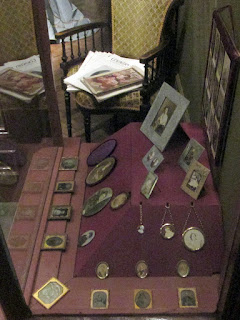 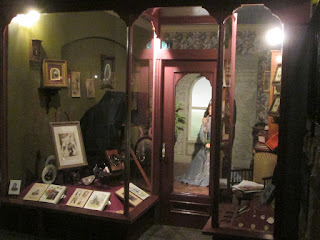 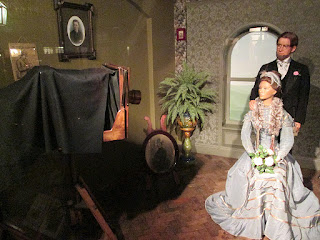 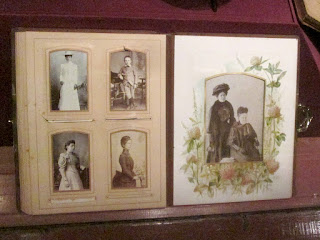 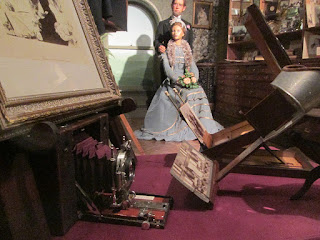 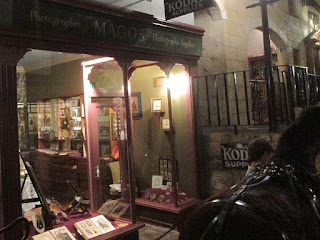 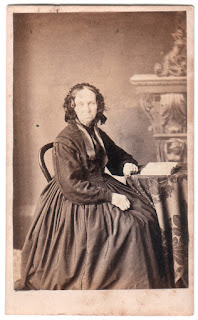 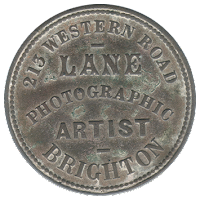 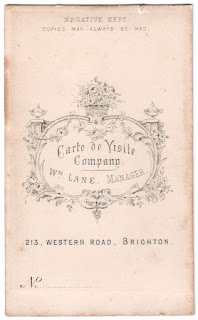 Here is another CDV (carte de visite) from my collection of Brighton photographers, and this time with the added interest of the photographer's advertising token which I managed to purchase recently.

Tokens, such as this one produced for William Lane, were inexpensive to manufacture, and preferred by some professionals because they were much more sturdy than business cards. 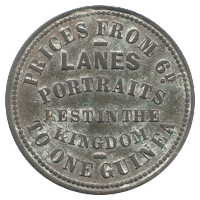 Lane was at 213 Western Road, Brighton, from 1853 to 1862, so that helps to date the photograph. The lady does not look as if she was too keen to have her portrait taken, but these were early days for CDVs, which did not really become popular in France, their country of origin, until 1859, so perhaps she did not fully understand the process.

If you would like to find out more about William Lane, I cannot recommend highly enough the wonderful Sussex Photo History website's two pages of information:
Page one; Page two.
No comments: Links to this post 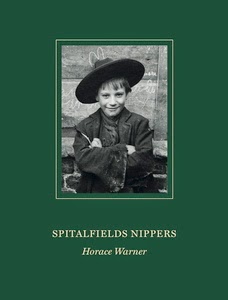 Around 1900, photographer Horace Warner took a series of portraits of some of the poorest people in London - creating relaxed, intimate images that gave dignity to his subjects and producing great photography that is without comparison in his era.

Only seen by members of Warner’s family for more than a century, almost all of these breathtaking photographs are published here for the first time.

This unique collection of pictures revolutionises our view of Londoners at the end of the nineteenth century, by bringing them startlingly close and permitting us to look them in the eye. 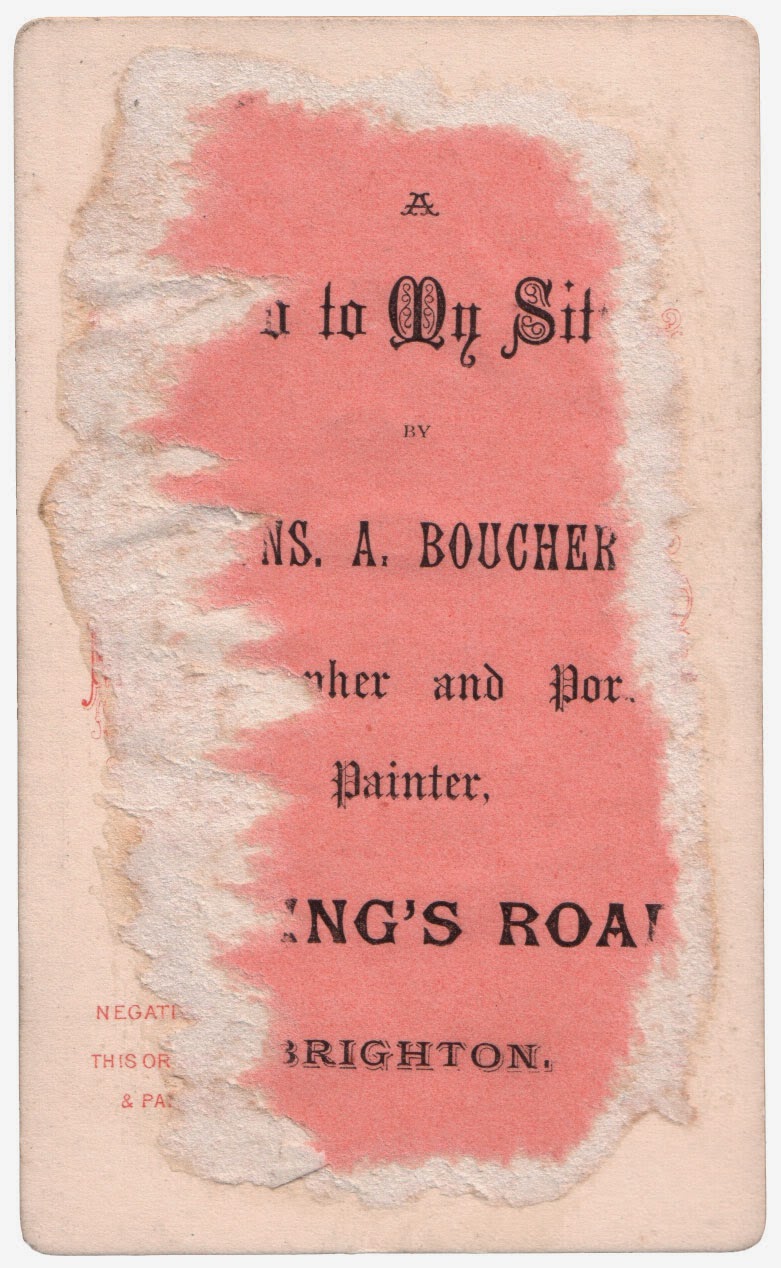 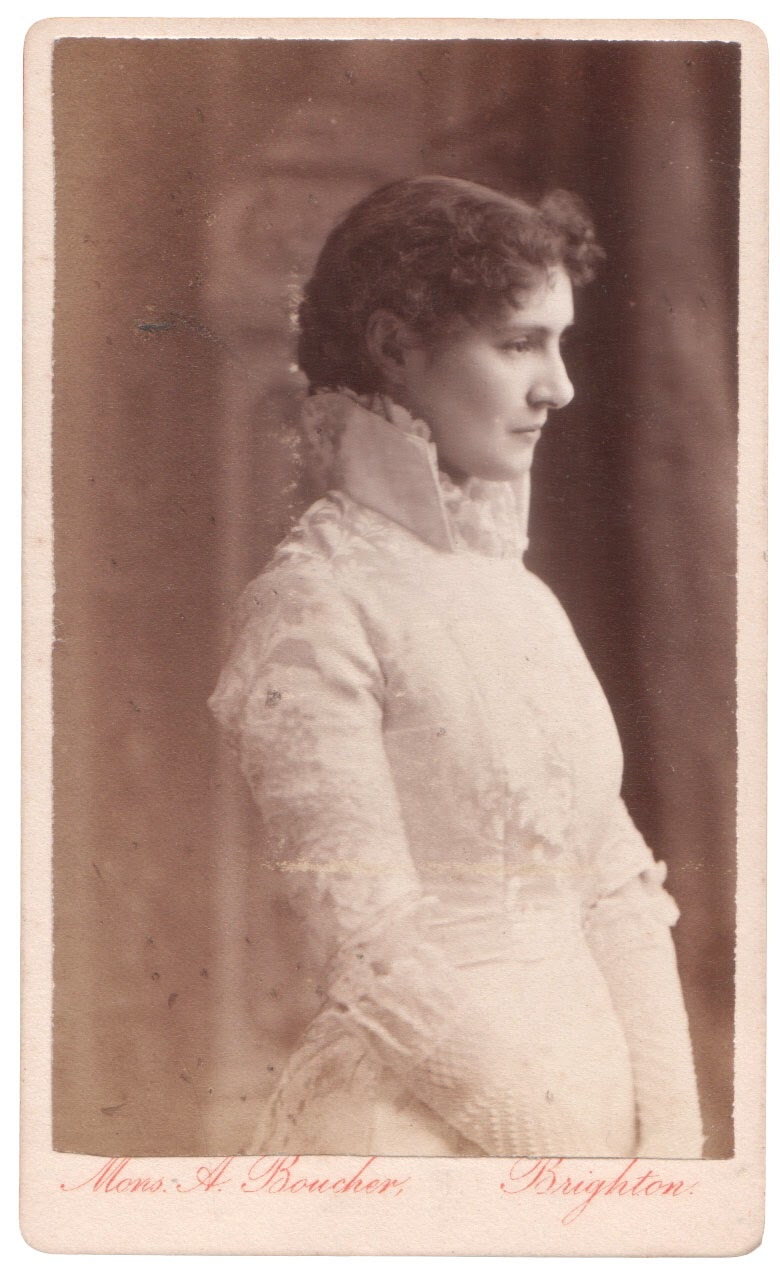 Another favourite photograph from my collection, which I am guessing shows a young bride in her wedding dress. Her expression seems to change the longer I look at the photograph. Sometimes she appears to be trying not to grin, then she looks rather serious, and sometimes sad.

Albert Boucher was also a talented artist; a self portraited painted around 1870 may be seen HERE together with a photograph of the Ship Street studio, c.1872. 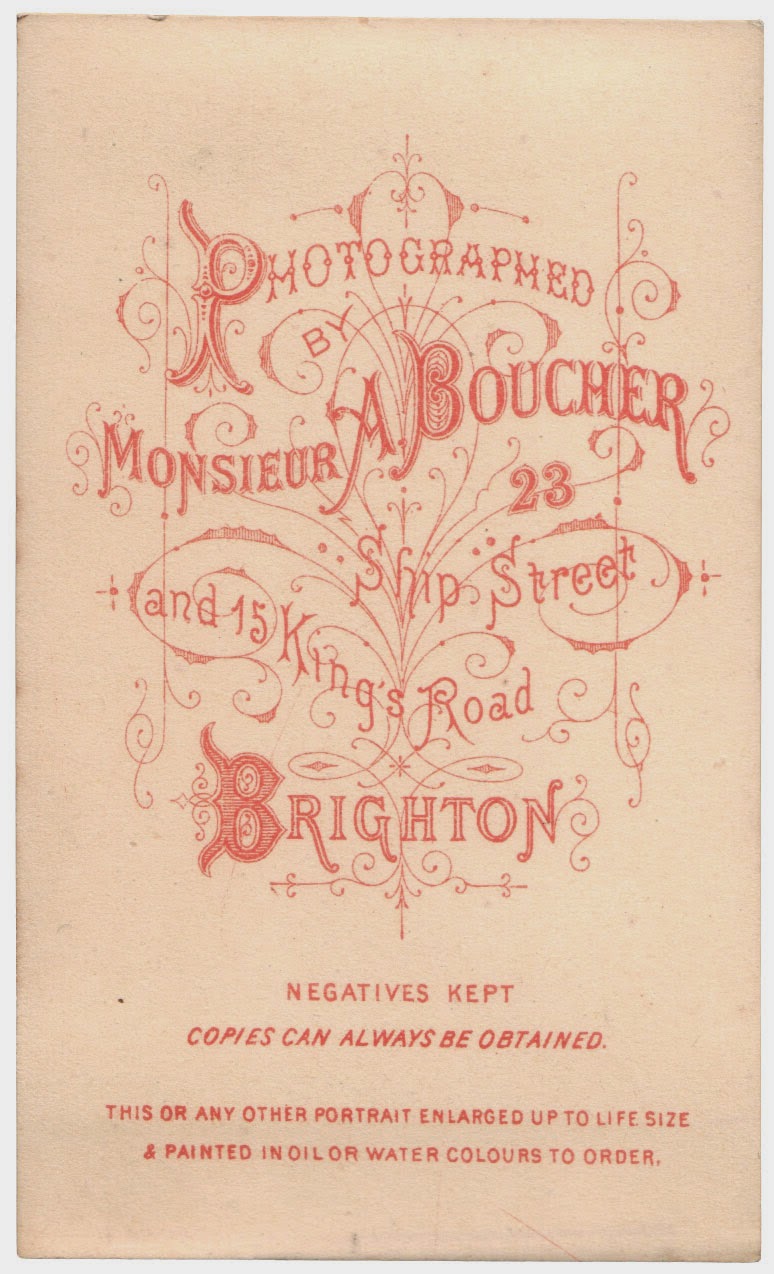 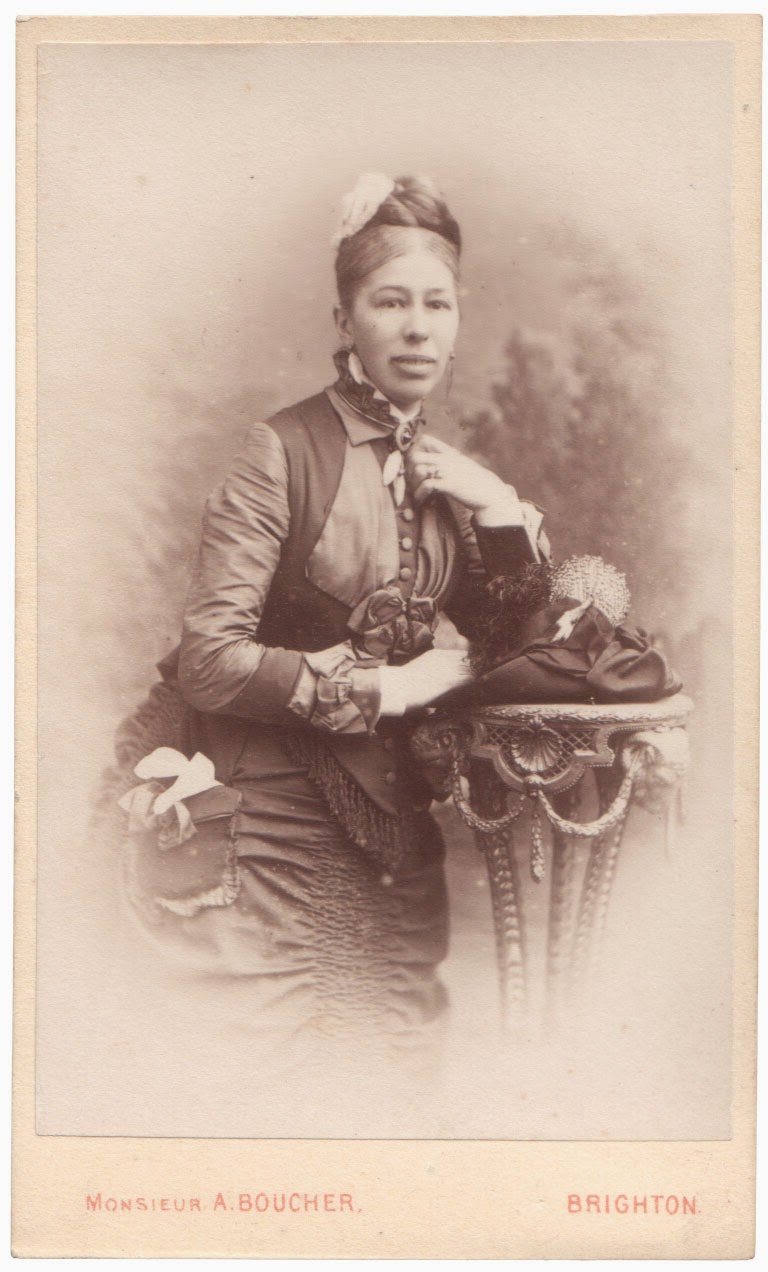 Another photo from the Boucher studio. Another Brighton photographer, who will feature later on this blog, Thomas Donovan, was employed as a studio manager by Albert Boucher from 1873, and was kept on following Albert's death by his widow Elizabeth to help run the business.

*The Boucher studio was run by Albert's wife Elizabeth following his death in 1875, and continued at 15 Kings Road, Brighton, until 1875.
No comments: Links to this post 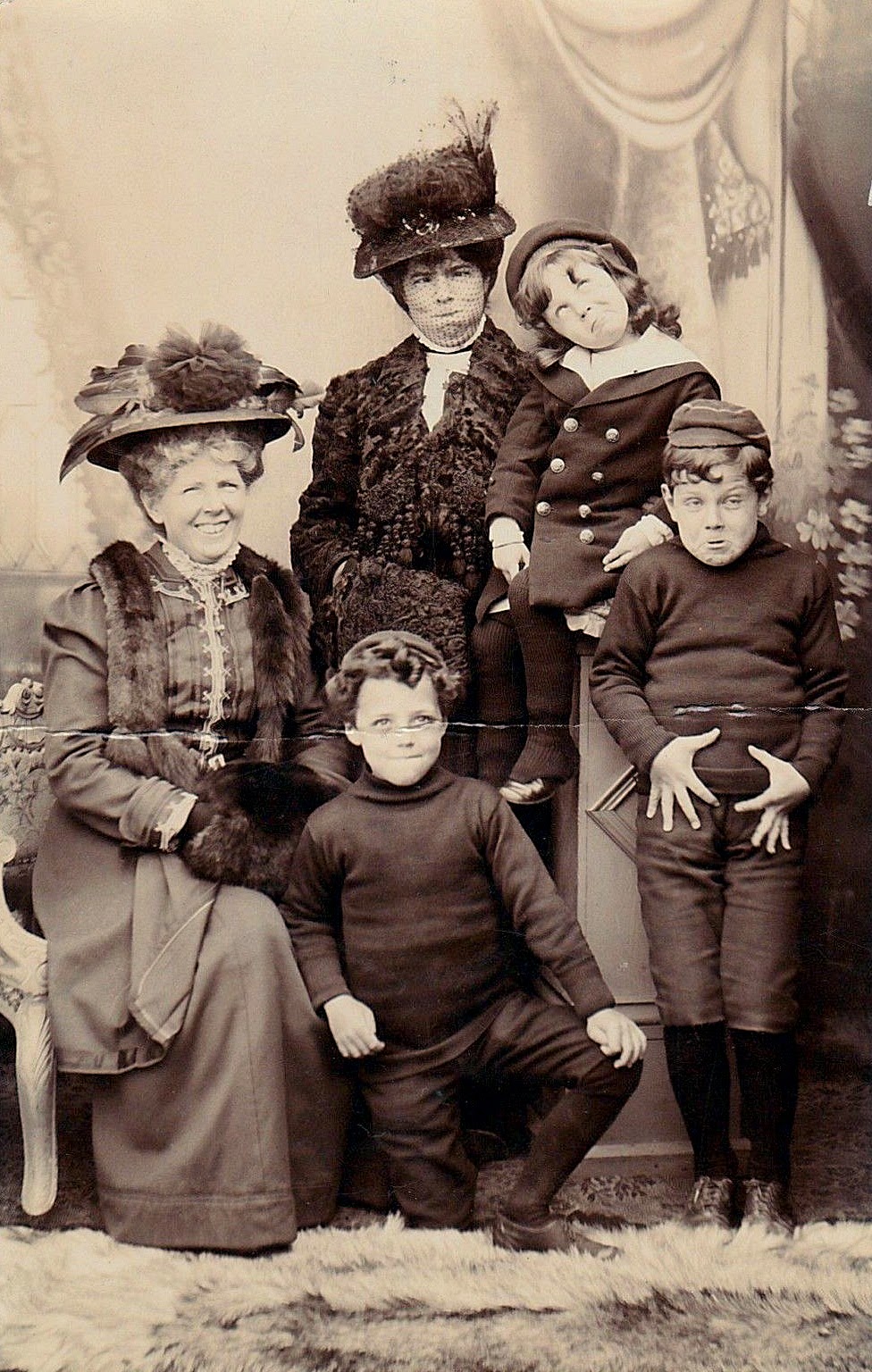 This has to be one of my favourite early photographs. It sold on eBay this month - I was pipped at the post in the last minutes.

Apparently it is a postcard-sized studio photograph from the Brighton area, although I don't know who the photographer was.

It is so nice to see people of this era having fun. I'm so used to seeing photographs where everyone puts on their best serious face and poses in a very stiff and starchy position. I would guess that there was also another, "proper" photograph, that went with this at one time.
No comments: Links to this post